The Day That Not a Single Snowflake Hit My House 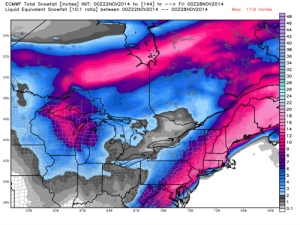 Navy computer model said we’d have a foot of snow at my house near Greenwich Cove in Rhode Island. Not a single snowfall fell.

On a day when I had already accepted that my location near Greenwich Cove in Rhode Island would not be favored for snow, I had nonetheless looked forward to the inevitable interludes of wet flakes mixing in here or there.

At least, that’s what made sense, given the soundings of the various levels of the atmosphere, and given what most meteorologists had thought would happen. I mean, the Navy computer model printed out nearly a foot of snow for my house less than 24 hours before the nor’easter started its way up the coast, and the model has handled nor’easters pretty well in the last

It got as cold here, 35 degrees, as it did in nearby places where plenty of snow fell, by the way. But by some miracle, for nothing else could achieve it, not a single snowflake fell at my family’s location. Several million raindrops fell both here and everywhere my car needed to go. But, again, not one fell at the family homestead.

I will recover, eventually, from the experience. Miracles are supposed to make us happy, after all. And it really did take some doing for the atmosphere not to let one unmelted snowflake reach the ground here yesterday.

The people on the weather board that I frequent were talking about the snow flooding down from the sky all day – in Maryland, Pennsylvania, Delaware, New Jersey, New York, Connecticut, Massachusetts, New Hampshire, and Maine. Just wasn’t meant to be here. Maybe next time.

As a post script: Just took the dog for his first walk of the day, and saw no fewer than four snowflakes, tiny ones, tumble from the sky. Did they make me feel any better? Yes, yes they did.

I am a lifelong environmentalist. I started my journalism career at The New Yorker, where I worked as a copy editor. Since then, my own work has appeared in The New York Daily News, The National Review Online, The Atlantic Wire, The Huffington Post, The Berkeley Daily Planet, The Providence Journal, Brown Alumni Monthly, The Narragansett Times, Rhode Island Monthly, and Providence Business News.
View all posts by Harold Ambler →
This entry was posted in snow, weather and tagged skunked, snow, snowstorm. Bookmark the permalink.
Loading Comments...
%d bloggers like this: