Antarctica’s sea ice sets all-time record for second day in row – how high can it go? 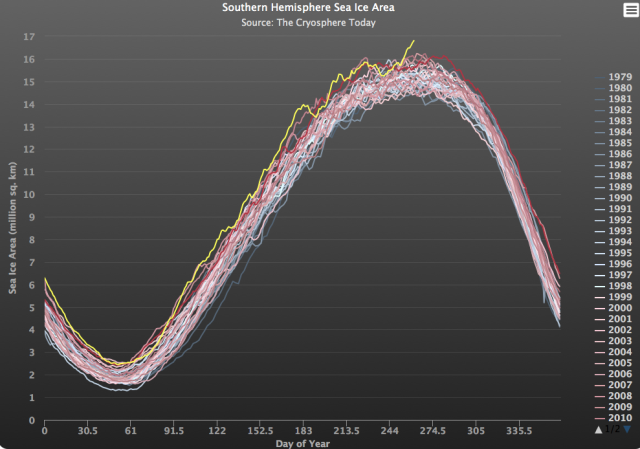 The year 2014’s ice is plotted on this graph of satellite-derived sea ice area in yellow. Antarctica’s impressively expanding sea ice is doing something that climatologists said wouldn’t happen: grow.

UPDATE as of 9/21/14, 9:58 am: When I posted this the headline the other day with the words “how high can it go” I didn’t imagine that we would see the ice flirt with the 17 million square kilometer threshold, but that is what has happened. As of Sunday, September 21, the most recent Antarctic sea ice area as measured by satellite now stands at 16.80 million square kilometers. I will ask again: How high can it go? Both NASA’s Walt Meiers and Gavin Schmidt have not responded to requests for comment.

Prior to the last two days, the previous record for sea ice ringing Antarctica was 16.23 million square kilometers, which occurred in 2007, and which I wrote about in my book.

Unlike Arctic sea ice, Antarctic sea ice has steadily increased in spatial coverage throughout the period of satellite measurement that started in 1979.

The increasing resilience of Antarctic sea ice, an accordion-like fringe collapsing and expanding seasonally around the southernmost continent, has surprised scientists, including a group attempting to visit Antarctica during the Southern Hemisphere summer earlier this year. The group’s vessel, the Akademik Shokalskiy, was caught by the ice, as were the vessels of two rescue parties sent to free the researchers.

The Antarctic sea ice has set a slew of records during 2014.

In June and July, records were set for greatest ever deviation from normal – what scientists refer to as an anomaly.

The year began with the sea ice setting a record for the calendar date, and it has set more than 100 such daily records since then.

Generally speaking, climatologists have downplayed the significance of Southern Hemisphere sea increasing during the past four decades, arguing that it may in fact result from manmade global warming via a number of possible mechanisms that have been posited, and that, whatever is causing it, the increase in ice is no counter-proof of global warming.

There is no disputing that the overwhelming number of global circulation models, the computer models climatologists rely upon to give the public information about the most likely future of the ocean-atmosphere system, originally predicted diminished Antarctic sea ice.

The incorrect predictions include NASA’s own computer model, as overseen by now-retired James Hansen, at the time the head of NASA’s Goddard Institute for Space Studies, one of the premier climate research groups around the globe.

Hansen’s successor at the helm of Goddard, mathematician Gavin Schmidt, did not respond to requests for comment.

Talking About the Weather also reached out to NASA’s Walt Meier, who has been on the record previously, indicating that Southern Hemisphere sea ice is less important to climate than Northern Hemisphere ice, that it shows significant regional variation around the Antarctic continent, and that examining the metric known as global sea ice, an anomaly figure derived by adding the anomalies of the Northern Hemisphere and the Southern Hemisphere, is an act without scientific merit.

If and when Meier responds to today’s all-time record for Southern Hemisphere sea ice, I will add his comment.

Antarctica’s sea ice is almost surely not done making headlines, if not history, in 2014.

I am a lifelong environmentalist. I started my journalism career at The New Yorker, where I worked as a copy editor. Since then, my own work has appeared in The New York Daily News, The National Review Online, The Atlantic Wire, The Huffington Post, The Berkeley Daily Planet, The Providence Journal, Brown Alumni Monthly, The Narragansett Times, Rhode Island Monthly, and Providence Business News.
View all posts by Harold Ambler →
This entry was posted in Antarctic sea ice, Antarctica, don't sell your coat, Gavin Schmidt, GISS and tagged don't sell your coat, GISS, record sea ice. Bookmark the permalink.
Loading Comments...
%d bloggers like this: