Did That Canary Just Flutter Its Wings? 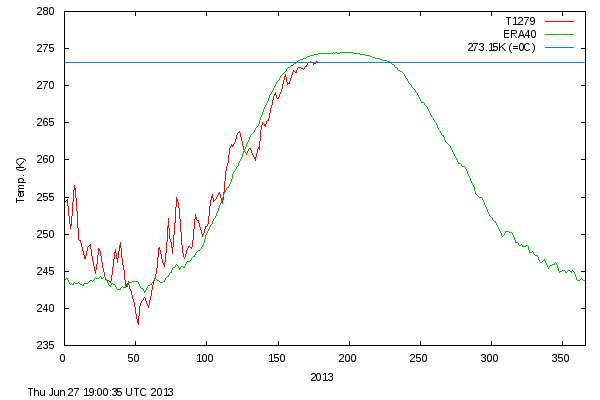 What is it? It is the onset of global cooling. How dare I make such a mental leap? How dare I not would be an equally good question.

According to the Danish Meteorological Institute, 2013 is the first year since 1976 when Arctic temperature readings north of 80 degrees latitude sat below the zero-anomaly line, what some would call “normal,” for more than 50 days straight. Getting close to 60, in fact, according to my highly scientific eyeball reading of DMI’s graph that you can click on yourself. Go ahead, click through the last few decades. Are you seeing what I’m seeing?

But wait, some are protesting (already), if you take the year as a whole it’s not even below average. And that’s true. On the other hand, getting temps so far north to stay below the zero anomaly line for such a long stretch is no mean feat. Otherwise, you’d see it happening routinely.

The news here, though, is that after climate alarmists have told us literally thousands of times that the Arctic was the canary in the coalmine when it came to climate, the canary is, possibly (not definitely, mind you), coming back to life, as it were.

Alaska was supposedly another canary in the coalmine. Permafrost was melting like ice cream on a 100-degree day, and methane was going to supercharge global warming like a muscle car on nitrous, dude. Like, watch out.

This was all, of course, before Alaska’s temperatures plummeted during the last decade and a half and global warming became an inside joke among the locals (not just Sarah Palin, in case you’re going to go there).

As readers of my book and blog are well aware, I have a stake in the debate: the first book about predicted global cooling (by Russian space scientists, among others) written by an American journalist happens to be my own. The book got good enough reviews from the likes of Freeman Dyson, but let’s just say global cooling hasn’t exactly become a household phrase.

Are the Arctic temperatures a blip? For instance, will there ever again be another period of 50-plus days in my lifetime when the temperatures up there are below average? And how long will the current streak run? Sixty days? Seventy? Only time will tell. In the meantime, don’t sell your coat, and keep watching the North. This could get interesting.

I am a lifelong environmentalist. I started my journalism career at The New Yorker, where I worked as a copy editor. Since then, my own work has appeared in The New York Daily News, The National Review Online, The Atlantic Wire, The Huffington Post, The Berkeley Daily Planet, The Providence Journal, Brown Alumni Monthly, The Narragansett Times, Rhode Island Monthly, and Providence Business News.
View all posts by Harold Ambler →
This entry was posted in Arctic temperature, don't sell your coat, global cooling, global warming and tagged arctic temperatures, don't sell your coat, global cooling. Bookmark the permalink.

13 Responses to Did That Canary Just Flutter Its Wings?