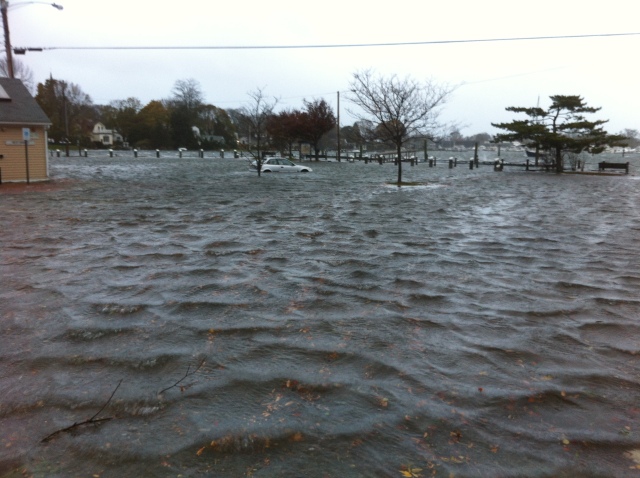 As of 6:30 pm, the Rhode Island coast has started seeing effects of the storm surge from Hurricane Sandy.

In Narragansett, Beach Street was closed, with washover from Narragansett Town Beach flooding the road. Boston Neck Road was on the verge of being cut by water a hundred yards south of the bridge over Narrow River, which had already exceeded its flood tide plain.

Also in Narragansett, South River Road was breached by storm surge in at least three locations, with the tide rising rapidly. Many residents along the low-lying road who had not heeded calls for mandatory evacuation could be seen looking anxiously toward the river.

In North Kingstown, Wickford Village was cut off by water. Police had closed the corner of Brown and Main as well as a second point at the intersection of Newton and Main.

The waters of East Greenwich harbor were spilling onto Water Street, which the police had closed to traffic at Queen Street.

I am a lifelong environmentalist. I started my journalism career at The New Yorker, where I worked as a copy editor. Since then, my own work has appeared in The New York Daily News, The National Review Online, The Atlantic Wire, The Huffington Post, The Berkeley Daily Planet, The Providence Journal, Brown Alumni Monthly, The Narragansett Times, Rhode Island Monthly, and Providence Business News.
View all posts by Harold Ambler →
This entry was posted in hurricane sandy, sandy, Wickford damage and tagged rhode island, sandy, storm surge, Wickford. Bookmark the permalink.