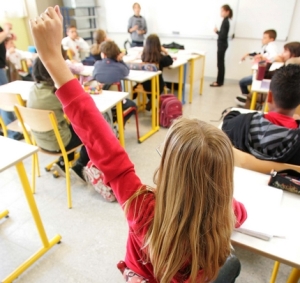 The Los Angeles Times is reporting that, horror of horrors, climate change skepticism is being forced into American classrooms by nefarious legislators intent upon keeping the nation and its young ignorant as long as possible. Here’s an excerpt from the Times piece:

A flash point has emerged in American science education that echoes the battle over evolution, as scientists and educators report mounting resistance to the study of man-made climate change in middle and high schools.

Although scientific evidence increasingly shows that fossil fuel consumption has caused the climate to change rapidly, the issue has grown so politicized that skepticism of the broad scientific consensus has seeped into classrooms.

The article goes on to talk about Texas and Louisiana requiring educators to present climate change skepticism (which the Times calls “denial”) and what a stark reflection of ignorance and backwardness the states’ actions represent.

As usual, the mainstream media, in this case embodied by the LA Times, has the story exactly wrong. First: the claim that “scientific evidence increasingly fossil fuel consumption has caused the climate to change rapidly” is bunk. In truth, as the global mean temperature stubbornly refuses to climb in a statistically significant way over the course of a decade and a half, skeptic scientists are gaining ground, not losing it.

We’ve been cooling for 6,000 years, folks. Is it OK to tell kids in high school this? You be the judge.

I am a lifelong environmentalist. I started my journalism career at The New Yorker, where I worked as a copy editor. Since then, my own work has appeared in The New York Daily News, The National Review Online, The Atlantic Wire, The Huffington Post, The Berkeley Daily Planet, The Providence Journal, Brown Alumni Monthly, The Narragansett Times, Rhode Island Monthly, and Providence Business News.
View all posts by Harold Ambler →
This entry was posted in Cap-and-trade, Climate change, crying wolf, don't sell your coat, global cooling, global warming. Bookmark the permalink.