I, Al Gore, Will Control Your Mind … Errr, Gimme a Minute, Just a Minute More, Wait! 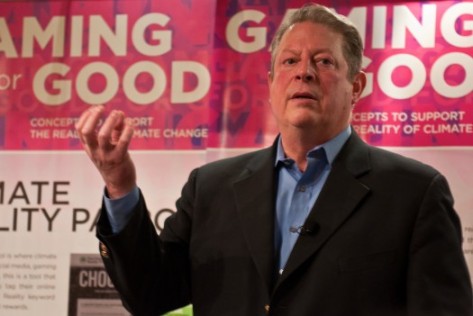 Al Gore’s Current TV is not having an easy go of it. With its Italian version shuttered in 2011, it now appears a virtual certainty that Current will also go off the air in the UK early this spring. Spun by Mr. Gore as resulting from the right-wing machinations of a dastardly Rupert Murdoch, the moves were more likely in  response to abysmal ratings in both countries. In the United States, Current TV’s principal journalistic star, Keith Olbermann, is no longer talking directly to his colleagues at Current, having grown frustrated over the network’s inability to provide a modicum of technical support.

But no big deal, those seeking global mind control generally hit a speed bump or two along the way, right? And now Mr. Gore has found an ingenious way to turn this speed bump into a ramp launching him into the stratosphere of positive public opinion: climate video games! These things are gonna be huge! One way you can tell is that the format requires, up front, that people of all ages (including and especially children!), have to bolster leftist untruths in order to win points.

No big deal, right? The end justifies the means after all! The biggest whopper that players are asked to shine up: that energy companies are behind the vast majority of climate skepticism. That makes sense, because it sounds sinister and plenty of “cool” people say it all the time. But get this: by far the most popular climate website of any kind, which happens to have skeptic leanings, is wattsupwiththat.com, and the site has never accepted a penny from energy companies.

I myself have been “out” as a climate skeptic since I published in The Huffington Post in 2009. How many e-mails and phone calls do you suppose I have received from Big Oil since that day? A hundred? Fifty? Twelve? How about none? Bingo!

I’ve met and corresponded with dozens of skeptics, from the very prominent to the very anonymous, and I have yet to see a shred of evidence connecting one of them to carbon-based fuel industry. As we’re fond of pointing out on my side, though, Big Oil funds the heck out of global warming scaremongers!

But I’m straying from the joy of climate games here. These things are going to be unbelievably successful. Believe me. You’ve just got to believe.

Here’s the climate game I’ve been playing for three years: Follow your research wherever it takes you, regardless of the personal, professional, and financial consequences. Endure an onslaught of vindictive and dishonest pressure from the well-financed American Left. And then: Just keep on keepin’ on.

I am a lifelong environmentalist. I started my journalism career at The New Yorker, where I worked as a copy editor. Since then, my own work has appeared in The New York Daily News, The National Review Online, The Atlantic Wire, The Huffington Post, The Berkeley Daily Planet, The Providence Journal, Brown Alumni Monthly, The Narragansett Times, Rhode Island Monthly, and Providence Business News.
View all posts by Harold Ambler →
This entry was posted in Cap-and-trade, Climate change, crying wolf, development, don't sell your coat, global warming, media, weather and tagged Al Gore, climate games, don't sell your coat, gaming for good, global warming. Bookmark the permalink.

2 Responses to I, Al Gore, Will Control Your Mind … Errr, Gimme a Minute, Just a Minute More, Wait!