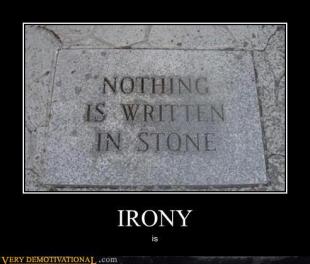 Climate change is the perfect subject for connoisseurs of irony.

The post below appeared in The Providence Journal of February 8, 2012.

In putting together my book on manmade global warming, I found myself bathing in irony more or less continuously. Below is a list of climate ironies in 2012:

Those who purport to love nature the most may actually fear it the most, and are in the midst of a terror-laden campaign to “control” it via carbon modulation.

Those who most need plentiful and affordable carbon-based fuels, i.e. all those living in the Third World (in India, China, Africa, South America, and rural Appalachia) are the ones the climate elite would deprive of carbon-based fuels.

The statement that “the science is in” is inherently ironic. The science is never in, and saying so reveals an antipathy for science.

Computer models have no grip on future climate whatsoever, and yet it is their terrifying predictions that have been used to control the debate about climate.

Windmills, symbols of gentleness and modernity, play a destructive roll in the environment and represent a step backward for humanity.

In a feast of self-righteous guilt, the greatest CO2 emitter per capita, the United States, is also the most important producer of climate-terror science.

The fascination with carbon dioxide among the public, supposedly representing some knowledge of climate science, actually represents almost complete ignorance of the subject. Not one in a hundred people possesses an idea what past climate has looked like on the planet.

Sea level, specifically the fear of it rising, is the most potent tool in the alarmists’ arsenal, but sea level has never been stable. It cannot be. A hundred and ten thousand years ago, during what’s known as the Eemian interglacial, sea level was 15 feet higher than today. This oceanic “highstand” occurred without the help of a single internal combustion engine.

Carbon dioxide has been labeled pollution, but it is colorless, odorless, non-toxic plant food.

Needlessly raising fuel prices in the name of carbon mitigation has the inevitable effect of freezing people to death in their homes, among other negative consequences. The moral superiority of climate alarmists is its own potent form of irony.

Those keeping the torch of knowledge alight in our time, the skeptics, are seen by most as morally corrupt and intellectually inferior. Among the many honest and highly accomplished climate scientists receiving such ill treatment is Henrik Svensmark, the Dane whose theory of cloud modulation will likely revolutionize the world’s understanding of the climate system.

Al Gore has received a Nobel Prize for his supposed furthering of climate science knowledge among lay people. Al Gore is personally responsible for dramatically enlarging the CO2 obsession among the public and thus enshrouding the world in scientific ignorance.

Most people on the left with passionately held beliefs about climate are in no position to debate it intelligently. They “feel” and they “know,” but they cannot discuss. Ad-hominem attacks against scientists, and writers who dare question climate orthodoxy by the way, are perpetuated by what is possibly the most potent PR smear machine on Earth.

“Climate change” is a fabulously ironic notion in and of itself. Climate has always changed. That is what it does. Now is a very nice time to be alive, climatologically speaking. The good old days of climate are happening at this very moment, in other words. People, for myriad reasons, wish to believe that they are so significant themselves that they must be witnessing something new. They must be.

Most meaningful measurements of the ocean-atmosphere system have been taking place for an astonishingly short period of time, nowhere near long enough to begin talking about “climate.” The single most significant measurement is probably the ARGO buoy system, measuring ocean heat content. Deployed in 2003, the system has not shown anything like the increase in heat predicted by James Hansen.

The world is cooler today than 8,000 years ago, and practically no one knows it.

The icier time, the Little Ice Age, which extended from about 1350 to about 1850 and that is looked back on so fondly by Al Gore and others, was no cakewalk. It was colder, icier, harsher, as its name implies, with more frequent crop failures and the suffering that entailed.

That coastal erosion is taken as proof of “climate change” is especially ironic. When have ocean storms and sands resulted in anything else? A single storm in 1362 killed at least 25,000 people and completely remade the coastline for large parts of both the Netherlands and Denmark. If such a storm were to take place today, it would be presented as evidence of “climate change.” Without irony, of course.

Even recent episodes of weather and climate history are successfully hidden from public view in plain sight. During the recent drought in Texas and Oklahoma, actual scientists went on the record stating that it was the “worst ever,” which is patently false. If the Dust Bowl were to take place again today, in exactly the same way that it unfolded in the 1930s, it would be seen as evidence of CO2’s awful power.

As someone who rather likes irony, I could not have chosen a more delicious subject.

I am a lifelong environmentalist. I started my journalism career at The New Yorker, where I worked as a copy editor. Since then, my own work has appeared in The New York Daily News, The National Review Online, The Atlantic Wire, The Huffington Post, The Berkeley Daily Planet, The Providence Journal, Brown Alumni Monthly, The Narragansett Times, Rhode Island Monthly, and Providence Business News.
View all posts by Harold Ambler →
This entry was posted in Climate change, crying wolf, don't sell your coat, global cooling, global warming, media, providence journal, weather and tagged Climate change, don't sell your coat, global warming, harold ambler providence journal, humor, irony. Bookmark the permalink.