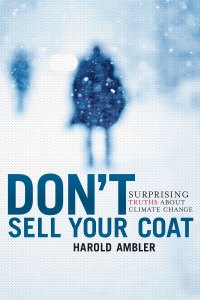 Ask anyone who’s lived through a real winter: It’s not easy being cold.

What follows is an excerpt from my new book Don’t Sell Your Coat, available here:

I want to examine the moral component of meteorological journalism. As I mentioned near the beginning of this book, I used to be an avid watcher of The Weather Channel. For a good couple of decades, the network was not only an important component for the fledgling cable industry, but an excellent source of information about current weather and climate, as well about atmospheric science itself. An interesting thing took place during the 1990s, though. Weather Channel viewership was found to spike during hurricanes, and not merely among viewers in areas that could be affected by the individual storm being discussed. A lot of folks evidently loved watching the progress of tropical storms, the stronger the better. Hurricanes became, over time, a revenue producer for the network. Experts were hired and given regular on-air time, and hurricane segments were given their own titles, their own graphics, and their own music.

People loved it. Much of this was quite innocuous, and arguably inevitable. Hurricanes are indeed interesting, and for a period of about 15 years it was widely believed, even by many scientists, that manmade global warming was ramping up the number, intensity, and duration of storms. In the last few years, however, links between recent atmospheric warming and hurricane activity, as we have seen, have been reconsidered.

In the meantime, though, the false link had lodged in the popular imagination, and The Weather Channel was more or less avidly exploiting it. The network’s presenters didn’t overtly come out and say that individual storms were generated by tailpipe and smokestack emissions, but they didn’t really have to at this point. The misconception was so pervasive and so widespread that merely trumpeting the “unusual” power of the storms themselves sufficed. In the meantime, the network slowly upped its on-air mentions of the phenomenon of global warming during the daily program cycle and eventually devoted a new segment to the phenomenon known as “Forecast Earth.”

Video alarmism regarding atmospheric phenomena is, perhaps, to be expected by a network like The Weather Channel. After all, it is hardly alone. The major cable news networks routinely send meteorologists and other reporters into the path of hurricanes, so that they can be seen amid the rising waters, gusting winds, and torrential rains.

On the other hand, the tranquil weather being experienced by most people around the globe at any given time goes ignored and unvideotaped. Again, one can understand why this would be so. In the newspaper business, and other journalistic domains as well, fires are of note. Non-fires aren’t. Fair enough. But something very insidious has taken place. The selling of weather disasters as entertainment has led to a state in which big business stands to gain handsomely from the perception that the planet has gone meteorologically mad. Specifically, General Electric stands to profit. When in 2008 NBC (owned by General Electric) purchased The Weather Channel, an interesting thing took place: the largest domestic producer of wind turbines became the owner of the best-positioned purveyor of images of destructive weather. The same year, NBC’s Today Show continued its longstanding practice of “showing” the great destruction to the ocean-atmosphere system caused by manmade global warming, with story after story: fires, floods, melting Kilimanjaro, you name it. The rest of NBC News, and the Weather Channel, meanwhile, keep the same pieces of videotape on nearly infinite repeat.

Summing up: Wind turbines do not deliver reliable electric power; the ocean-atmosphere system is not broken; scaring people needlessly isn’t nice – and it distracts them from the actual environmental problems surrounding them.